Warning: count(): Parameter must be an array or an object that implements Countable in /home/customer/www/staging1.sdgoodwill.org/public_html/wp-content/plugins/MapListPro/cmb_metaboxes/init.php on line 746
 OUSD art students rescue, repurpose Goodwill items | Goodwill Industries of San Diego County
Skip to content

Use it up, wear it out, make it do — or give it to an art student at Oceanside High School to turn into something artistic or useful.

Ten art students from the school recently visited the Goodwill Industries of San Diego County’s Otay Mesa After-Market Facility, where they each chose a well-used object to rescue and rejuvenate.

“The kids selected junk,” said teacher Anna Ward. “Things that probably would have gone to the landfill.”

Then they visited Goodwill’s e-commerce site near the Sports Arena, where Goodwill staffers photograph items, create inviting descriptions, and put them online to be snapped up by bargain-hunters.

Inspired, the students turned their objects into useful — even beautiful — pieces.

“All these kids followed through on their items,” said Ward. “I was totally surprised. Some kids made a work of art, some kids made it into something else.”

The pieces will be for sale on Goodwill’s e-commerce website, and the proceeds will benefit Oceanside High School.

The visit and art project were part of an Oceanside Unified School District program that links to the city’s Road to Zero Waste commitment, adopted in 2014. The Zero Waste program started on campus last year, said Ward, and this year her principal asked whether she had any students who wanted to participate in the related Goodwill project. Ward and art teacher Robin Raznick visited the Otay Mesa site with the students, “who loved it,” Ward said.

Goodwill also has set a goal of zero waste by 2025, said Darlene Cossio, director of communications for Goodwill. The art project was done “in honor of Earth Month and to give people on a budget some great ideas.”

And the students had plenty of those. “One team of girls got an old, clunker bike and completely took it apart,” said Ward. “They made it into a beach cruiser.” 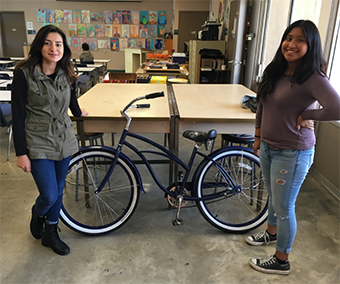 One student took a vacuum cleaner and turned it into a sculpture; another transformed an old bowling ball into a garden ornament. The seat of a wooden stool became a clock face; an ugly dresser became a dressing table Cinderella after a white base coat and pink painted flowers were applied.

Student Deanna Moore found herself eyeing an ugly little cabinet that was missing a leg. “But I kept being drawn to it,” she said, “so I chose it.”

At first she was just going to replace the leg and repaint the unit. “Then I decided to completely change it,” she said. Deanna ended up removing the legs and fastening the unit to a small wine rack so that all of it could be used for storage.

“It could be a little cabinet, or a wine rack, or a towel holder,” said Ward. “It could go in any room. She really did a nice job with it.”

This wasn’t the first time Deanna, a junior, had turned junk into jewels. “I like to go on Craigslist for free stuff. I repurpose it and sell it for a quick buck,” she said. “I’ve done a lot of stuff like this,” with help from her parents, she said. “Every once in a while I make $50 or $75.” 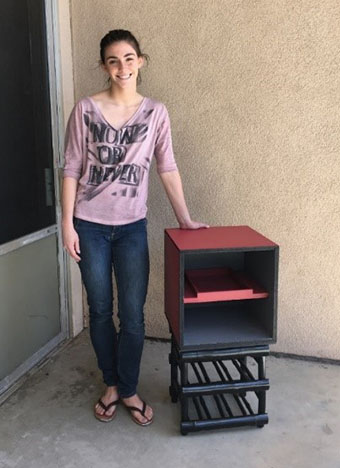 The items will go up for bid at shopgoodwill.com/sandiego starting at 8 a.m. Monday and ending at 6 p.m. May 22. Search for “CurbUp!” to find the students’ items.

“The idea is, now these items are going up for auction, and they hope to sell them,” said Ward. “The kids get credit toward something they’d like to buy at Goodwill.” (They’re also getting some extra school credit.)

Ward has seen a lot of pieces over her 28 years as an OHS art teacher, but “I was really impressed” with the students’ ingenuity. And the Goodwill project has given her some ideas for next year’s classroom work, she said.

This year’s project also got a thumbs-up from the students. “It was really fun to go down there,” said Deanna. “I had no idea how Goodwill did their stuff. I thought it was really interesting to go on the tour — a good learning experience.”