Warning: count(): Parameter must be an array or an object that implements Countable in /home/customer/www/staging1.sdgoodwill.org/public_html/wp-content/plugins/MapListPro/cmb_metaboxes/init.php on line 746
 Good is Happening in East County through Goodwill Programs and Stores | Goodwill Industries of San Diego County
Skip to content

Good is happening in East County through Goodwill programs, stores 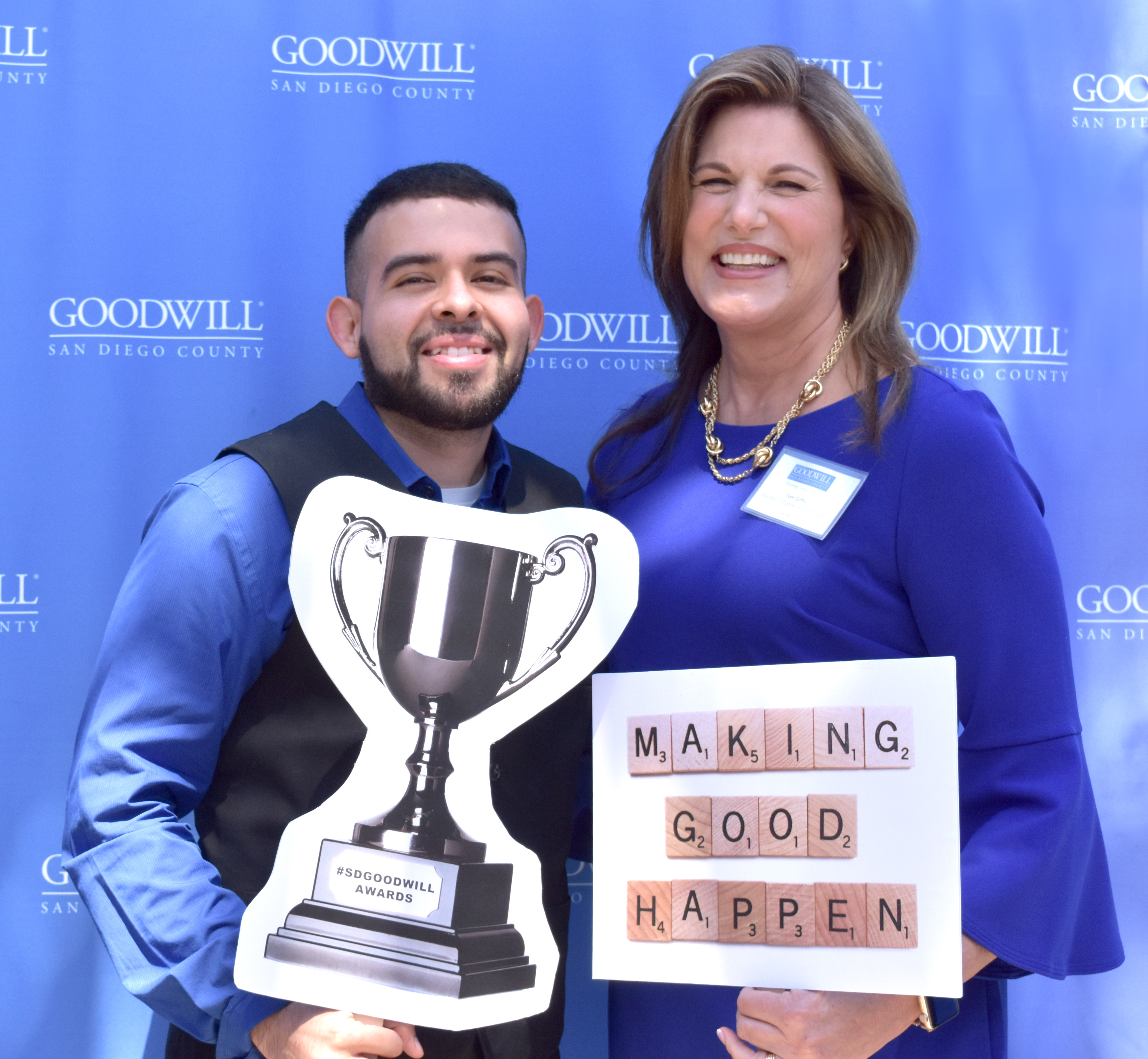 Goodwill is invested in “making good happen.” But what often goes unappreciated is that, while Goodwill is a big organization with branches across the country, at its most fundamental level, it is made up of people from our own communities.

One such person is Jessee Diaz, the Del Cero bookstore manager who was named Ambassador of the Year at Goodwill’s annual awards banquet on Monday, April 15.

“Jessee joined Goodwill with no work experience, and he was able to earn promotions through hard work and dedication,” said Toni Giffin, President & CEO of Goodwill and the day’s master of ceremonies. “He was willing to accept feedback from management, taking it as an opportunity to learn and to grow.”

Diaz’s five promotions in six years pale in comparison to the act of integrity he displayed on the job last year when he found $46,000 in donation – a secret savings account accidentally turned in when relatives of the owner dropped of items containing it. Diaz found the money and reported it to lost prevention immediately, following every step of protocol.

“In 2018, Jessee exemplified our aspirational values of honesty and integrity,” said Giffin. “There was a wonderful television profile of Jessee’s act of honesty and when asked if he would make the same decision again, he said, ‘yes, it was the right thing to do.’”

Diaz, who has worked for Goodwill for seven years after being unable to locate a job following the acquisition of his associate degree, said he never thought to do anything different with the discovered monies.

“I didn’t think twice, I really didn’t,” he said. “Who knows what he or she went through to get that money?”

The La Mesa employee said Goodwill has made him feel special.

“This company really invests in its employees,” he said. “Thanks to Goodwill, I’m becoming a good leader. Jessee when he was 22 can’t imagine the Jessee I am now.”

“I have to admit, as with most volunteer boards, we spend a lot of time looking at goals, objectives, results and numbers,” said Jonathan Tibbitts, Board Chair. “Therefore, my favorite meeting each year, is this annual meeting where we have the opportunity to see of the organization’s work and to hear the success stories of some of our outstanding members.”

Among Goodwill’s contributions to the community are their four community employment centers and veterans program where they help members of the community, whether veterans or individuals with disabilities or other barriers to employment, find success in the job market through training and placement.

Darlene Cossio, Director of Communications for Goodwill San Diego, said 49.5 percent of the organization is made up of people with disabilities or other employment barriers.

Ultimately, Cossio said, the real power behind the good of Goodwill is the community itself.

“We can’t accomplish anything without the donations and purchases of our community,” she said. “We’re incredibly grateful for them and we want them to continue to shop with us and donate with us so that we can continue to train and employ people with disabilities and other barriers.”

Read the article in the East County Californian.